Was at Skyfall together with my brother today. Thought that the homo-erotic scene between James Bond and the villain was the best part of the movie. Afterwards we went to a great Indian restaurant in Dresden Neustadt. Right opposite of it the so-called Nordbad (public bath in the Northern part of the city) is situated were this picture was made late at night.

This isn’t obviously my picture but it’s my photograph made from a poster on a wall in my kitchen slightly edited with Photobucket.

Not the best picture today but I’d like to show you what I’ve done in the evening: watching my favourite Comte de Monte Cristo movie with Louis Jourdan, one of my favourite actors, as Edmond Dantès from 1961. 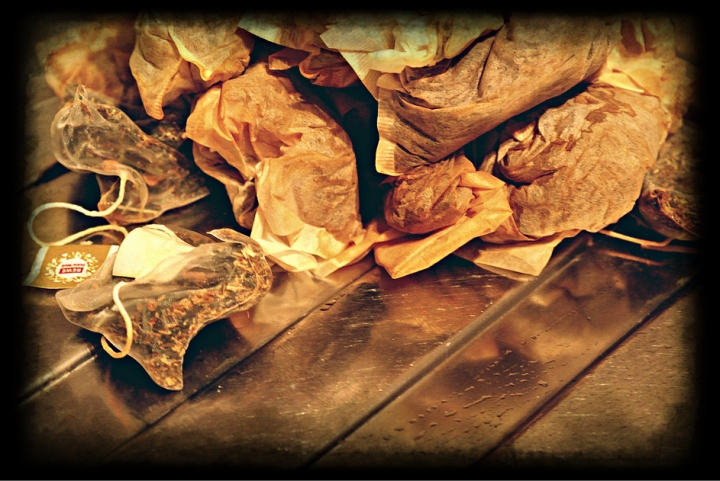 I like to collect all te teabags I use day in day night for my various teas and only throw them in a bin when the collection is too big for my kitchen desk. And here is one example just before getting rid of it.

I still own a cassette player because I have some cassettes I like to listen to from time to time and this one I probably like best: Swiss actor Bruno Ganz reads “Der Fall” by Albert Camus. Brilliantly read and a great book combined with Ganz’s great voice. Simply perfect. 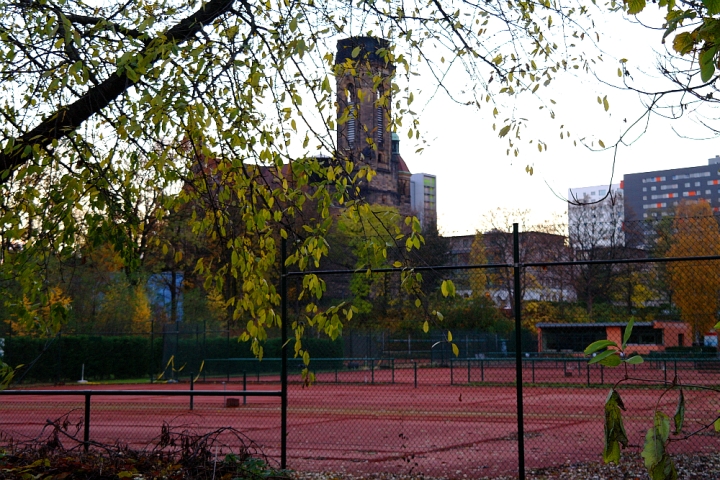 Had a guide tour at the SLUB today and went to Aldi afterwards to buy some carottes and other vegetables. On my way I took this picture of the Lukas church as seen through some trees and tennis courts.

This is Clint Eastwood on a wall in my flat. Just guess how I did and later edited this picture. I like it a little bit.

This is a plate to remember the 100th birthday of Richard Mollier, German professor of Applied Physics and Mechanics. The Mollier-Bau of the TU Dresden is called in honour to him.

Just one of those great house facades in Dresden.

The newest addition for my patchwork quilt still in progress.

This time another house facade in Dresden but slightly more modern than the previous one.

The little duckie called AbsolvEnte I brought with me from Bochum went swimming today. In my bathtub. She enjoyed it. 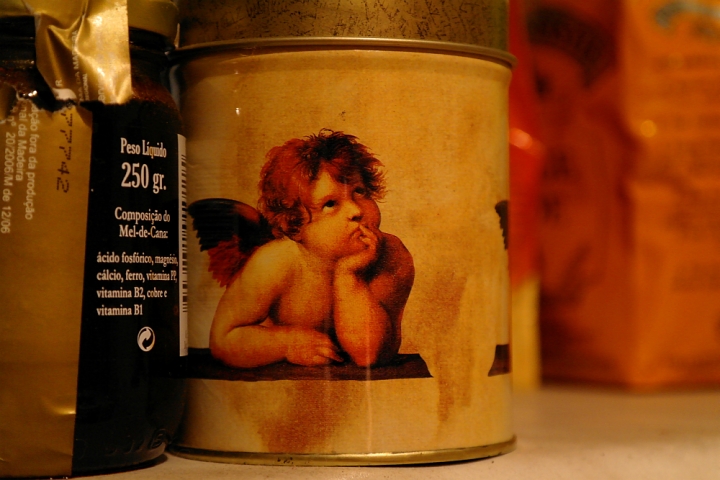 One of my tins for loose tea I own. This one with the famous angel of Raphael from the Sistine Madonna. As I live in Dresden I obviously have to own something like that. 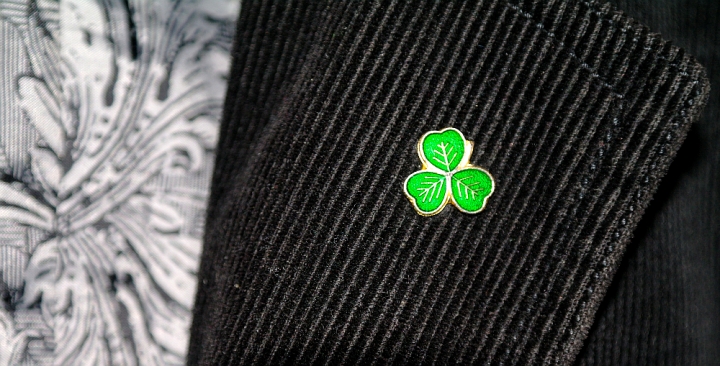 This is part of my jacket with the shamrock on it I had bought in Dublin.

I was in strange creative mood today so I decided to take another traffic lights picture. It’s not the best one probably but very creative (not really — I simply don’t have a better picture today). 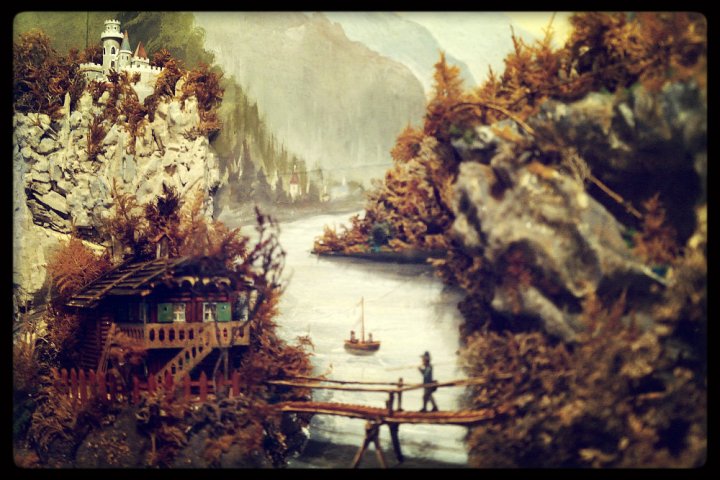 Went to my parents by train today because my brother had chosen to use his bicycle for the 50+km. My father celebrated his birthday a few days ago so I got a great dinner and some cake. After a chat with my grand-parents I have chosen the old 3D picture made in 1893 as a good photograph for today.

Lindt chocolate is expensive but very tasty. But sometimes it can also be hard to enjoy when you have such cute figures like the teddy bear. But it inspired me to make this slightly nonsense Gif. Just to remember the lovely bear that to this very minute is long dead.

It may be food blasphemy but it was very tasty so I don’t really care: risotto from carrots and peas (and rice obviously) with fishfingers.

Bought and have eaten this great Irish toffee (the best toffee in the world) four years ago in Dublin in some random tourist shop. I need to have it again every time I see the tin box — which is almost every day. 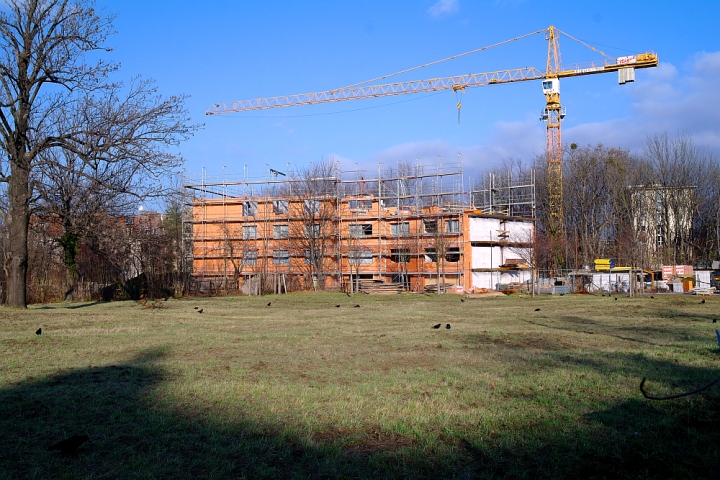 Very next to my house this building is currently in the making. I still have no idea what it will be when it’s finished. I very hope for some shops to buy the daily needs. 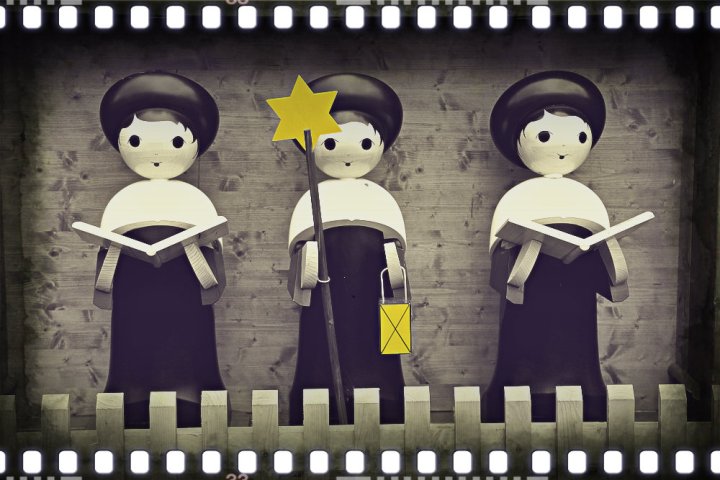 At first I thought I could post a photograph of our ugly Xmas tree. So I indeed have two pictures but I decided to bring forward these wooden singers also to be found on the Dresden Xmas market. I just thought it was a more fitting Xmas market picture.

This is my advent calender this year to bring anticipation for Xmas with a (hopefully) great mug of tea every day until Christmas Eve.

Once again another part of my future patchwork quilt in the making. What you can see are 80 already knitted rows of 50 stitches each so that makes 4,000 stitches in total just now. In the end it will be probably 6,000. Just this one tiny part of 90.

It was quite late at night when this old fellow looked into my window and because he was so bright and I still hadn’t got an idea for the daily photo I thought it was more than fitting to give the old boy a chance.

My little collection of foot bags. If you know a site with really special baggies give me a hint, please.

I think it was when I first watched a Star Trek / Next Gen episode where Captain Picard ordered an Earl Grey, hot from the replicator when I first wanted to taste it. From there on until now it is my favourite tea and I drink one litre per day. So I need a pack of loose Earl Grey every now and again but thanks to my mum I received this packet of great taste (and one full kilo). I’ll inform you when it will be empty.

When I went outside for a little walk to the railway station around high noon it was a bit rainy so I had chosen for some little leaves with raindrops on it for the daily picture. And when you look very carefully you may notice the little mirror effects seen through some of them.

Last year Roger Waters once again came round to present us The Wall and I missed it. I was a bit down because I like this rock opera. And some weeks ago when I’d noticed that he’s do it again next year I had to buy a ticket. And here it is: arrived today and will happen on 4th Sept 2013.

My second advent calendar arrived today: this time with chocolade while the first one includes tea. I’m really looking forward to December!

Back to main page

you came here by accident? Well, not at all. You must be a wrestling fan, perhaps a total Dean Ambrose fangirl or fanboy. Maybe you do like William Regal, Wade Barrett – Bad News Barrett – Damien Sandow, Chris Jericho – Y2J – Cesaro as well. You even still like CM Punk and most certainly Paul Heyman. But most of all you consider yourself a Dean Ambrose fan. Well, don’t go any further then, because you’ll find anything about Dean Ambrose in here: hilarious wrestling reviews, written to an intellectual jerk gimmick. You’ll love it. Together with watching the videos from the great Dean Ambrose appreciation website, all the Gifs that I’ve collected from Tumblr (and properly marked my sources, of course!) and looking at my collages. Everything you need to know about Dean Ambrose, you’ll find in my Dean Ambrose FAQ. But if you are into reading, I’ll always recommend reading my Dean Ambrose wrestling reviews. Find them all at once under the Dean Ambrose hashtag – right into this hashtag cloud on the right from this meaningless little text here.

So, dear boy, go on with reading about Dean Ambrose and I’ll always appreciate your thoughts on my writing. Just don’t take me too seriously.